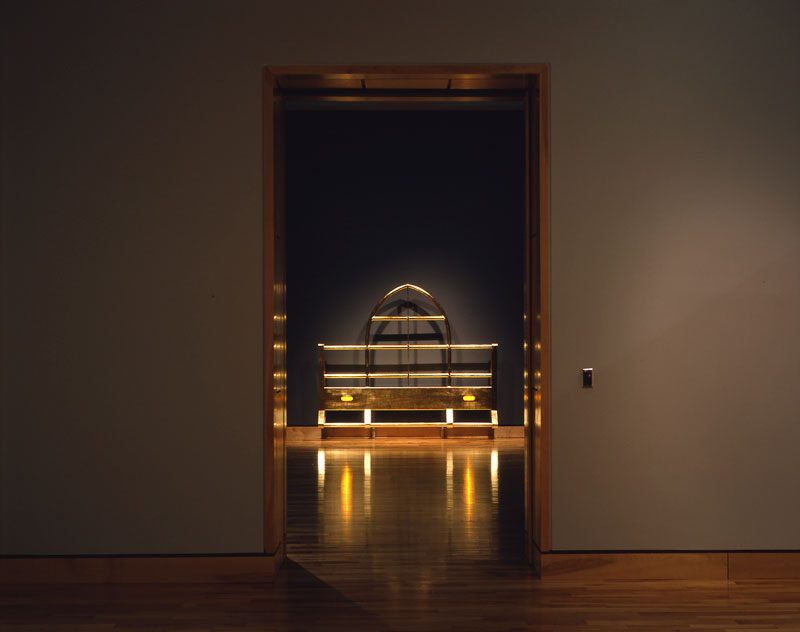 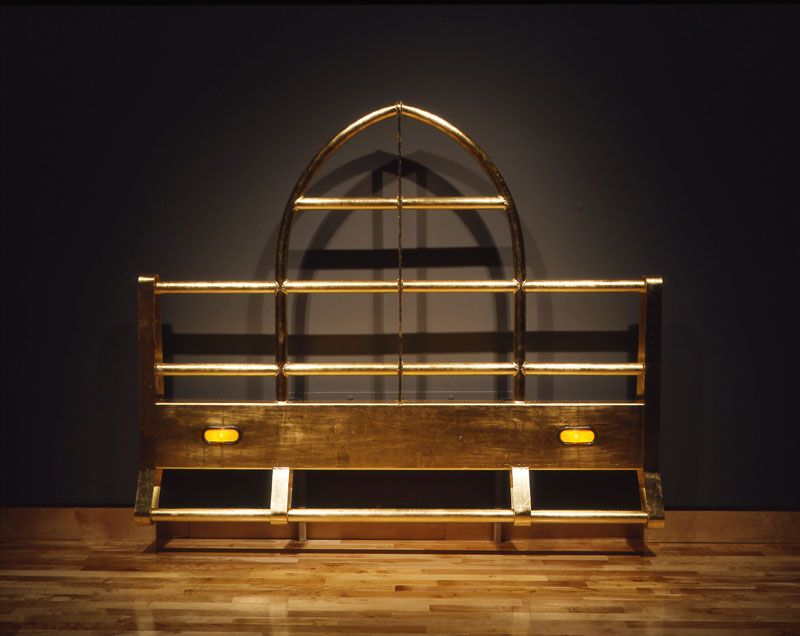 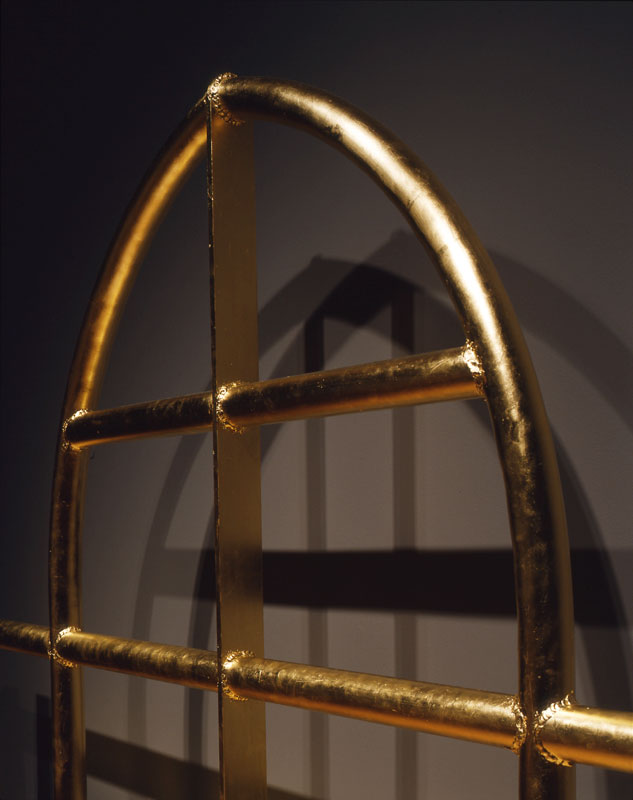 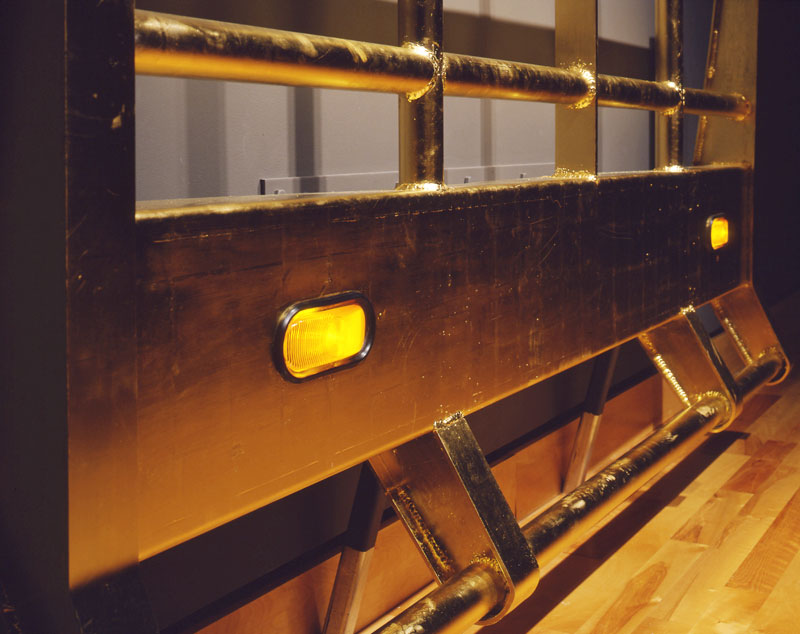 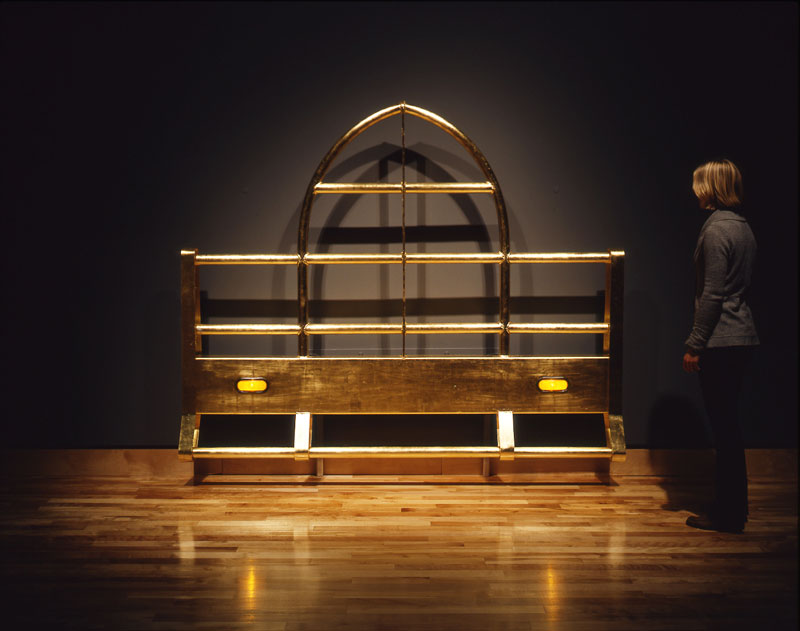 Our Protector was completed in early May 2009, for inclusion in the exhibition Republic at the Rooms Provincial Art Gallery in St. John’s, Newfoundland. The exhibition, curated by Bruce Johnson, was the second in a two-show examination of Newfoundland-and-Labrador identity at a time of great change for the province. At that time, the fisheries were gone and/or failing; tourism, however, was thriving, and the province was more prosperous than ever, due to the recent boom in offshore oil production. The exhibition Republic explored the notion of the republic as manifested in Newfoundland and Labrador’s cultural and political evolution.

Our Protector is a full-size, fully-functional moose rack, or moose bumper: a metal gridwork that can be bolted to the front of a tractor-trailer to protect it in collisions with moose, deer, or other large animals. I have always been struck by the formal beauty of these guards and thought they looked remarkably similar to Medieval and Renaissance altarpieces, given their triptych structure with a high central section. Accentuating this connection, I designed the central section of a custom moose rack as a gothic arch, resembling the arch of a church window or door, or that of a vaulted church ceiling. I had the rack fabricated by a truck mechanic, to the specifications of a Peterbilt (that most venerated brand of semi), in the usual aluminum bar, plate, and pipe; I then gilded the piece, applying the sheets of 24-karat gold leaf by hand. The process was a marriage of pre- and post-industrial techniques, of sacred and vernacular craft traditions. Installed in the bumper section are functional running lights, and the piece is mounted at a height and distance from the wall that recall the position it would have relative to road and vehicle, if installed on a truck.

The work is a conflation of histories that have become myths in Newfoundland — those of the church, the moose, the highway. Each of these histories is fraught. The church held out the promise of salvation, yet it perpetrated what are now notorious abuses. The moose was introduced to the island as a food source, which it is. However, annual figures for moose collisions are high; there are many deaths, both of passengers and of moose. Highways and roads are a vital link between communities, many of which were once accessible only by boat. The highway (and the ferry, accordingly) allows the importation of the majority of the island’s goods, and so it is a lifeline. But given Newfoundland’s dependency on imported goods (especially food), it is a very tenuous lifeline. Our Protector explores the moving interface, or threshold, between binaries: safety, security, and salvation are on one side; dread, death, and damnation on the other. From the threshold, these two groups of entities can become indistinguishable.