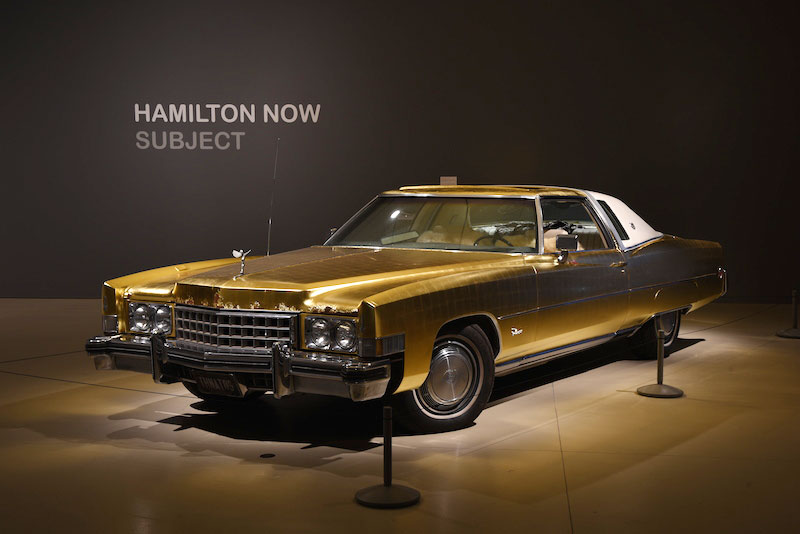 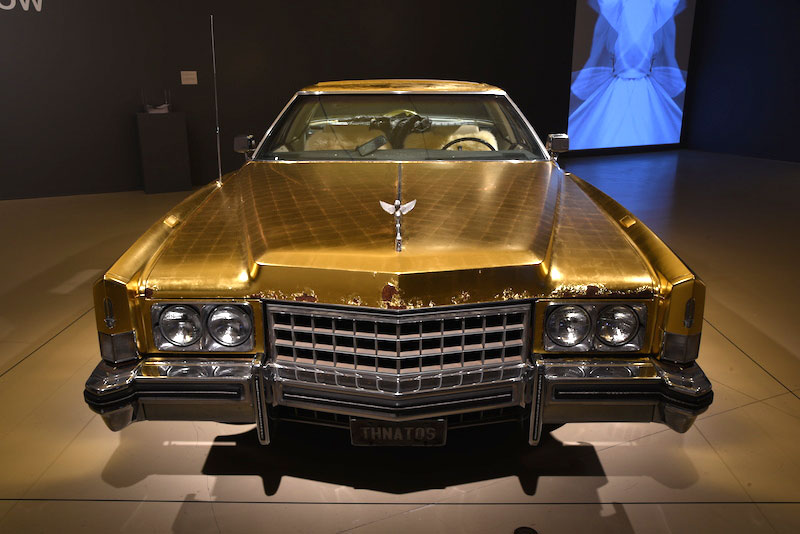 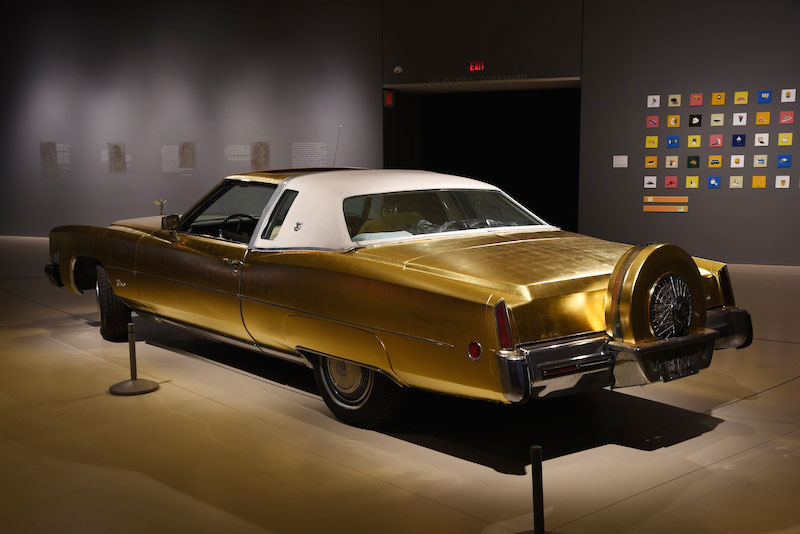 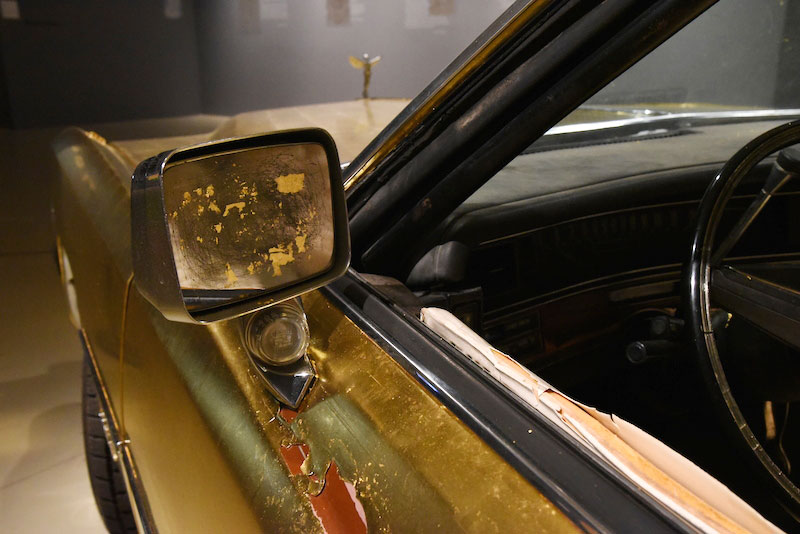 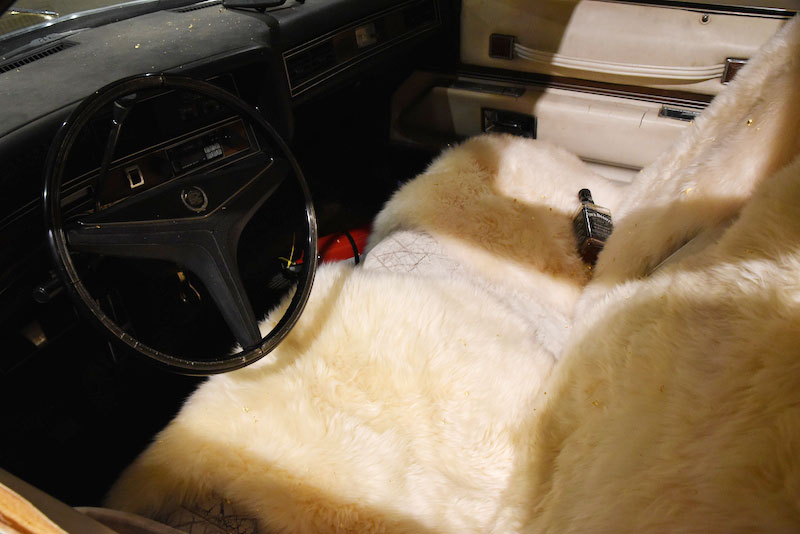 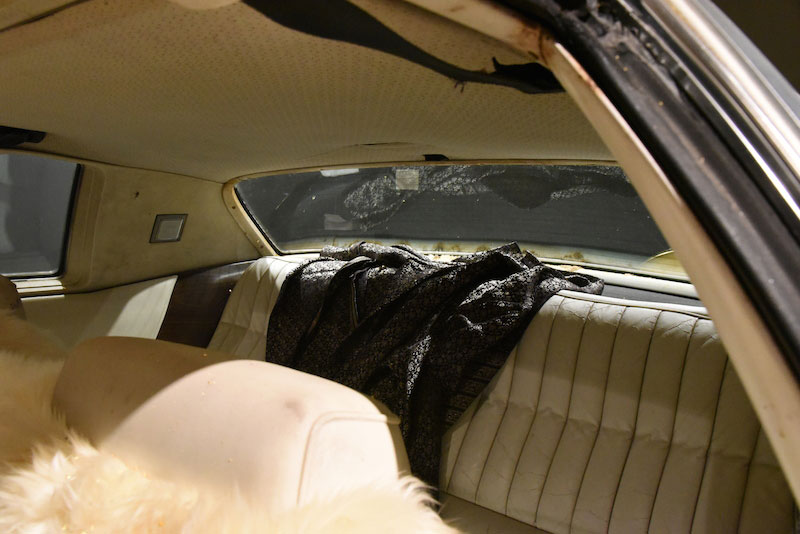 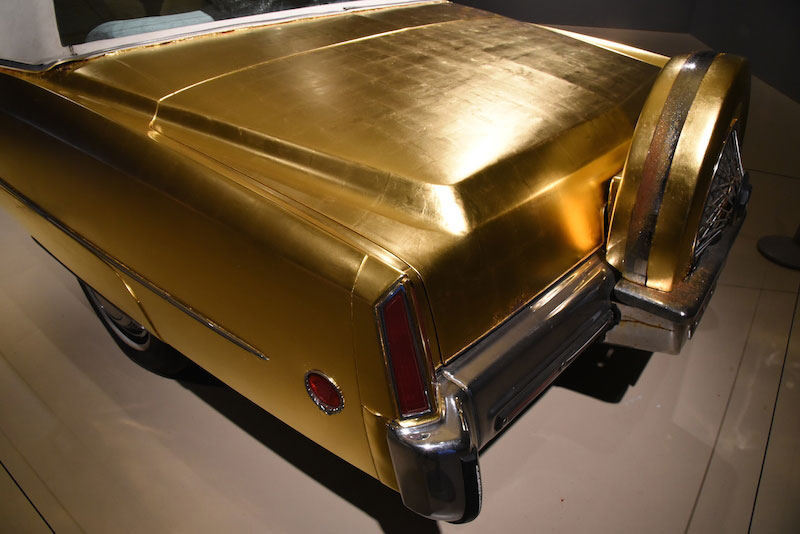 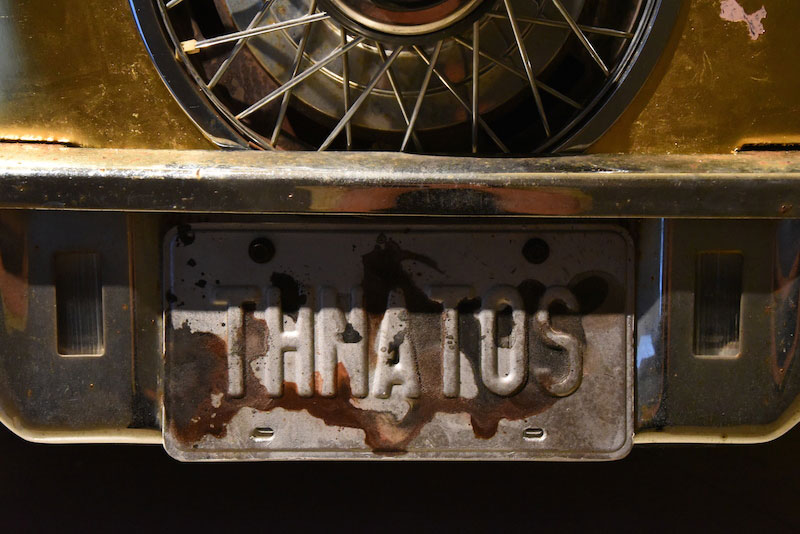 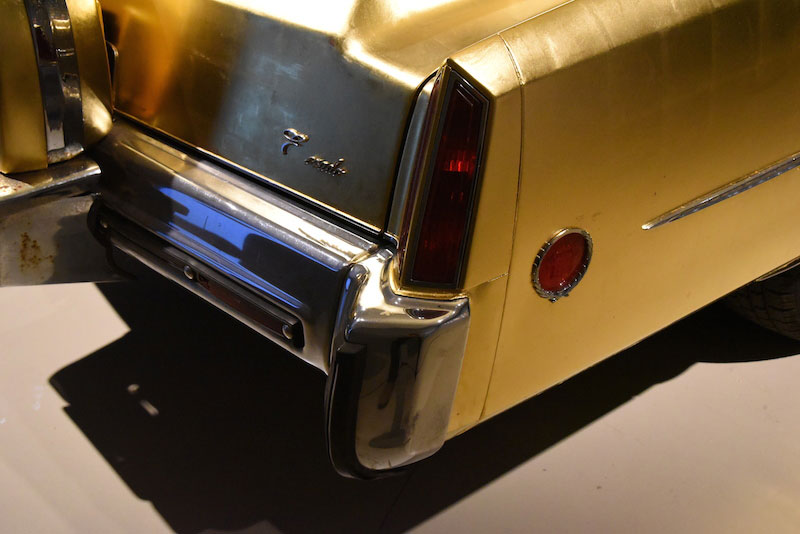 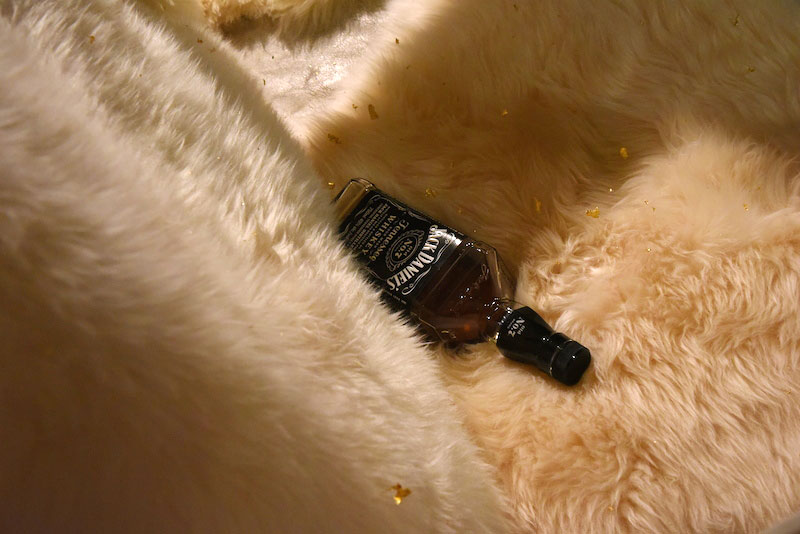 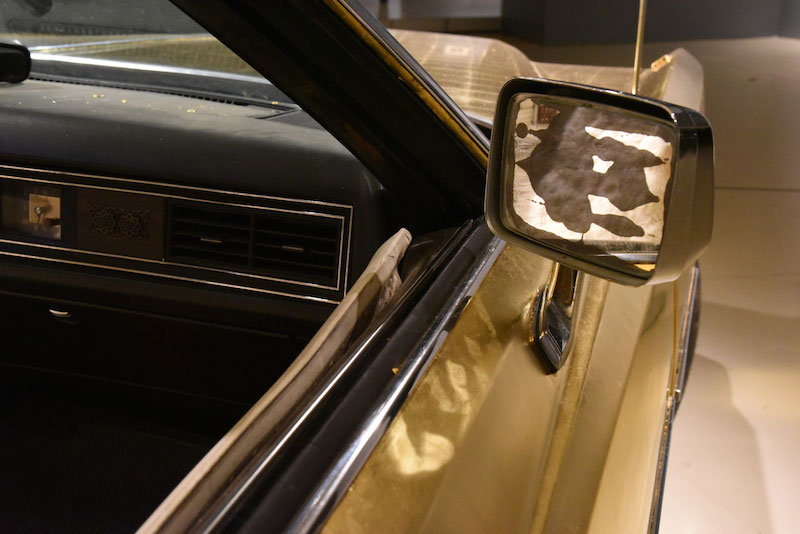 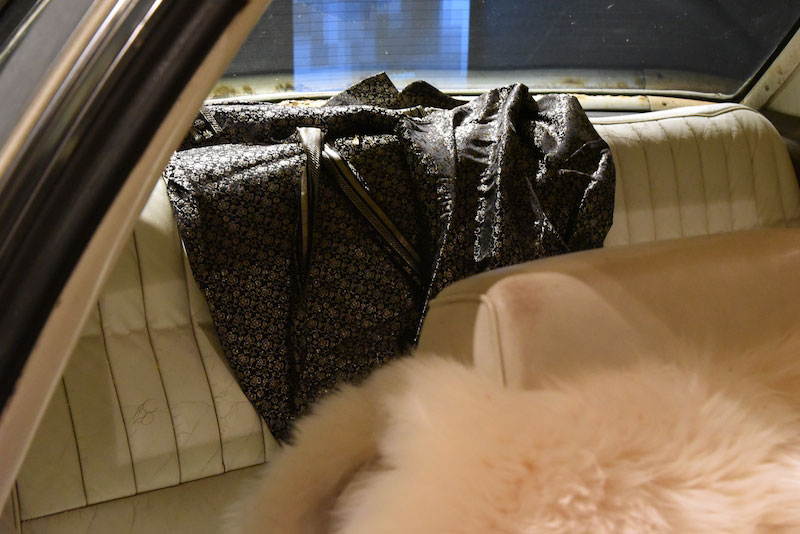 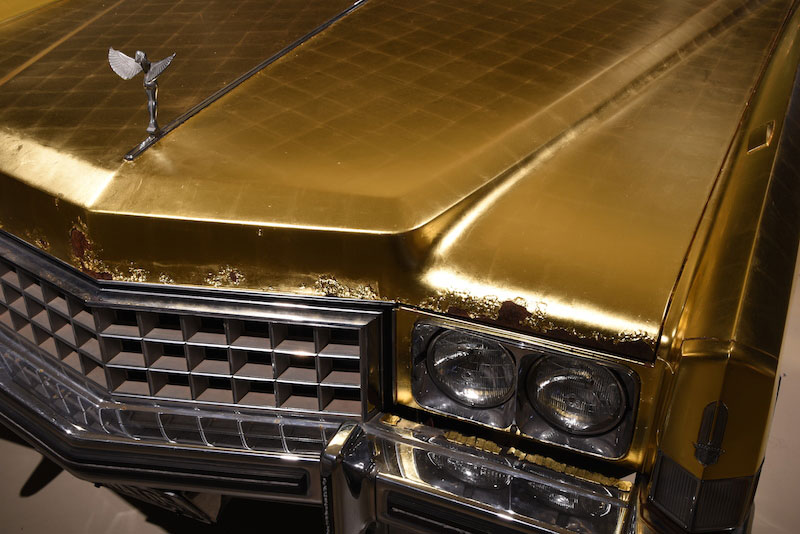 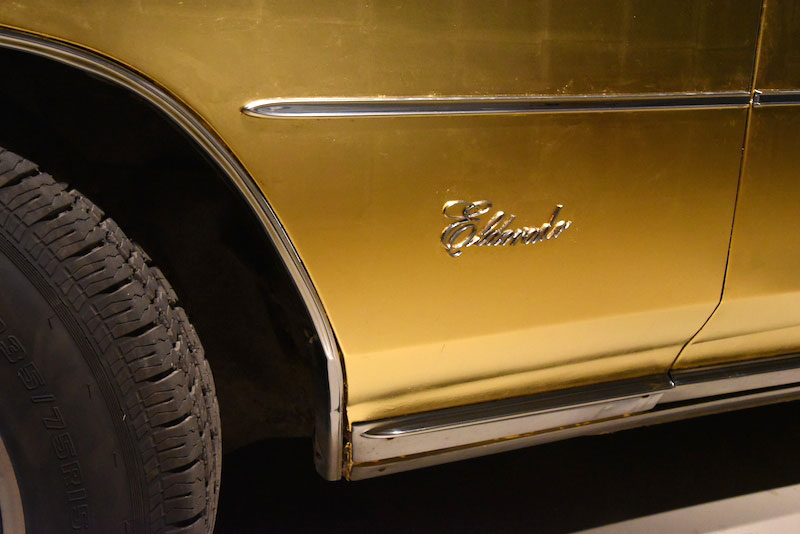 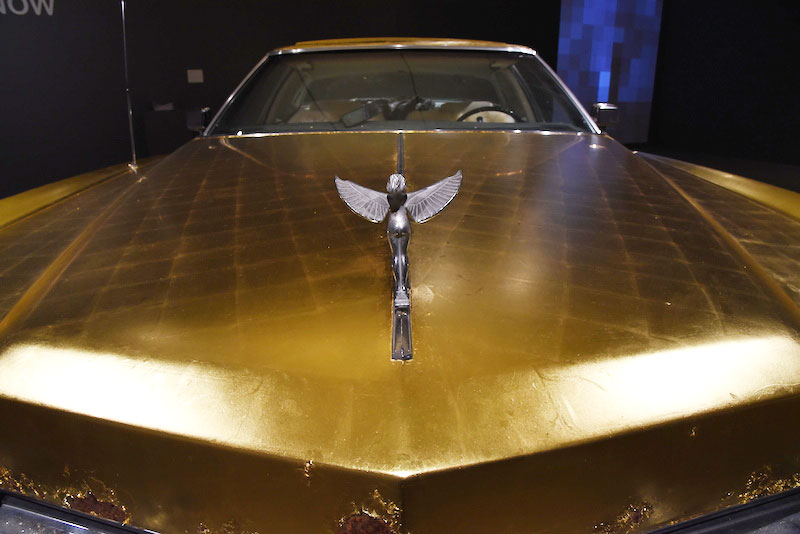 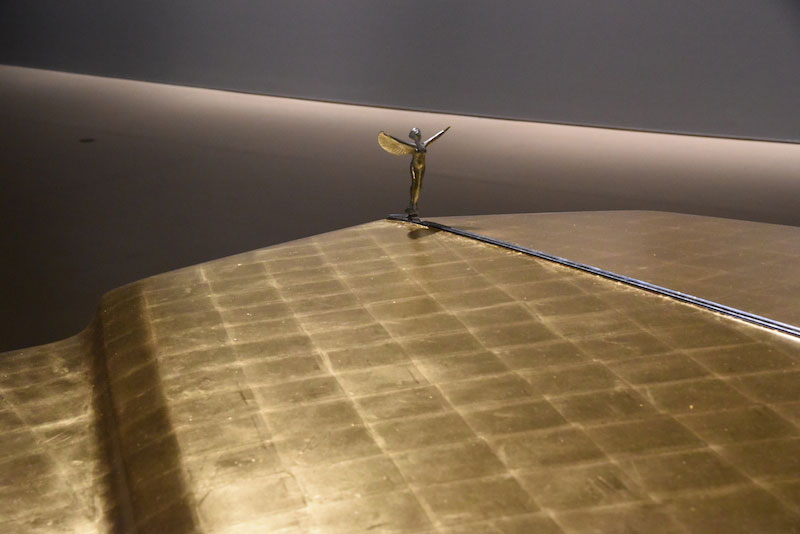 Thanatos (THNATOS is the licence plate abbreviation) is the Greek god of non-violent death, a sort of boat-man who ferries the dead to the underworld. Thanatos is also the psychoanalytic term for death-drive, or the tendency toward self-destruction. The potent symbolism of the Cadillac (swagger and luxury, American-style) and El Dorado (the mythical city/kingdom of gold, and unattainable fantasy) form the basis of this sculpture, which uses pan-historical and pan-mythological elements to speak of humanity’s continuing cycles of folly. The backwards-facing angel hood ornament is a nod to German theorist Walter Benjamin’s Angel of History, who, being blown backwards (blindly) into the future by a succession of catastrophes, only sees the collective ruin of the past. The golden sheeps’ wool that covers the car’s front seats refers at once to automotive customization and to Jason’s search for the Golden Fleece. The rear-view mirror has been pulled-off the inside of the windshield, making consequences — what is left in the wake — unseen. The obscene beauty and extravagance of the pure gold leaf, covering bubbling paint and rust blisters, speaks to the decadent end-period of empires. Using a conflation of seduction and danger, menace and comfort, the car symbolizes our collective willingness to be participants in, even agents in, our own demise. In our unyielding pursuit of both business and pleasure, we are paving our own road towards geopolitical and environmental catastrophe.

Full of piss and vinegar, the 1973 Eldorado rolled off assembly lines into a brand-new year, and was perhaps the most comfortable way to burn a gallon of gas while travelling eleven miles. On October 17th of that year, OPEC (triggered by Saudi Arabia’s King Faisal) imposed the first of its oil embargoes (using the so-called “Oil Weapon”) to punish America and its allies for supporting Israel in the concomitant Yom Kippur War. Oil imports ran low, gas prices spiked, and massive cars filed into massive lines at filling stations, hoping for a drop. The Eldorado might serve as a potent symbol: dead duck; golden goose; white elephant; sacrificial lamb; albatross. Through dumb-luck and unlikely family ties, I have had for years, a curious garment in my closet — a parlour jacket that was commissioned by King Faisal himself. Reeking of metallic tang, the jacket’s supple black silk is ornately filigreed with gold thread. It is strange that I should own it, but I accepted it as my thinly-edged wedge into a convulsive and symbolic moment in world politics, one which casts a long shadow forward to today and indeed, the future.

If you’re a history nerd, or subject to the delectable tugs of mysticism, numerology, or cause-and-effect, have some fun and look up 1973 and you will never be the same. You will go around, banging a wooden spoon on a resonant pot, proclaiming that this is the point at which the world went around a hard, painful corner. Well, something happened, anyway: America admitted defeat in Vietnam; Roe vs. Wade; Watergate; the Oil Crisis; the Wounded Knee Occupation; Elvis’s Aloha from Hawaii; the World Trade Center completed; The Dark Side of the Moon, Augusto Pinoche’s bloody coup in Chile; the most disastrous Indy 500 of all time; Secretariat wins the Triple Crown; Bobby Riggs’s and Billie Jean King’s Battle of the Sexes; The Exorcist; Comet Kohoutek; Skylab (America’s first space station) launched aboard the final Saturn V rocket; Gravity’s Rainbow, Crash, Fear of Flying published; the first cell-phone call; the first reality TV show; the patent for the ATM machine; Pioneer 11 shot into orbit; R.I.P. Pablo Picasso, Robert Smithson, Sister Rosetta Tharpe; CN Tower begun; etc., etc. Oh right, and there was a preening, paranoid, narcissistic, and impulsive man in the White House . . . One thing’s for certain, the three decades of unparalleled economic boom following the Second World War came to a grinding, groaning, flatulent halt, all in hues of olive green and mustard yellow. Whether or not this was the kink that teetered Modernism into whatever came after it is not up for me to decide, but what is more interesting to me than anything, is that this car is precisely 18.5 feet long. In November of 1973 it was confessed in the Watergate hearings that a section of Richard Nixon’s self-taped secret conversations had a gap in them. This famous erasure would be one of the final nails in the coffin of his presidency. That gap was precisely 18.5 minutes in duration. You tell me if that’s a coincidence . . .

Note: the idea of “gilding an Eldorado” was conceived with Hamilton sound artist Marco D’Andrea, who is currently working on a sound piece which will be incorporated into the vehicle for future presentations of the work. This project was made possible by a grant from Hamilton’s City Enrichment Fund.